Today, I gave my first Arduino lesson to my sons (ages 8 and 12) and their friend (age 13).  It only covered identifying parts of the arduino board, hooking the arduino to the computer, starting the IDE, using the built in blink example, changing the example to flash S.O.S. in Morse Code, refactoring the example so that it uses a â€œdotâ€ and a â€œdashâ€ function, and then writing something else in Morse Code of their choice.

The lesson print out is below, but let me give some insight into how it went.

My younger son (8 years) had some trouble with putting the â€œdelayâ€ command between the digitalWrite(13, HIGH) and digitalWrite(13, LOW).  Delaying while the light is off made sense to him, but using it to keep the light on was counter intuitive and difficult for him to grasp.  I need to find a good way to explain it.

My older son (12 years) had no trouble with creating the basic function.  The only mistake that he had trouble with was putting the code in between () for the dot and dash functions he defined.  I explained this and he was on his way.  He even created a function for each letter so that he could just spell out the words using function calls like this for â€œhiâ€:

My sonâ€™s friend (13 years) had no trouble.  He was able to do the morse code with no trouble.

I think all in all, this lesson would work out best for 6 grade and above..

Â· How to hookup the Arduino to the computer

Â· How to open the Arduino IDE

Â· Learn how to define a function

What you will need:

Â· Arduino software (assumed to already be installed on the computer)

Activity 1: Take a look at the Arduino board 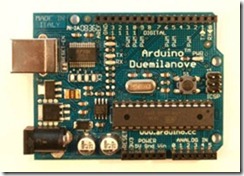 Try to identify the following items:

Â· GND pins (how many of them are there?)

(aref we will learn about later)

Activity 2: Connect the Arduino to the computer using the USB cable. Which lights come on? What do you think that means?

Take a moment to look at this program. This is written in a computer language called â€œCâ€. There are several things that you should know about â€œCâ€

1. It is case sensitive. So â€œhelloâ€ is different than â€œHelloâ€. (notice the first one has a lower case â€˜hâ€™ and the second one has a upper case â€˜Hâ€™)

2. Every statement must end with a semicolon â€œ;â€. What is a statement? A statement is a command that you give to the computer. Look at every line that ends with â€œ;â€ to see examples of statements

3. function are commands that are built in and that you can define yourself. There are two functions that are defined here: setup and loop. These are very special to the arduino. When defining a function you have to specify if the function will â€œreturnâ€ a value. Since these do not return a value, you see that â€œvoidâ€ is listed before their names. Do not worry about understanding this now. It will make more sense later.

4. After the function name is defined there is a set of () with nothing in them. This is where the parameters of the function will go. â€œsetupâ€ and â€œloopâ€ do not take parameters so they are blank. Again, do not worry about understanding it now. It will make more sense later.

5. The actual code of the function is contained within in braces: {}

The â€œsetupâ€ function gets called one time.

Take a look at this program. Can you figure out what it does?

In the setup function there is a statement: pinMode(13, OUTPUT); This set the Digital Pin 13 to be in Output mode. This means we will be sending a value to this pin. You could specify INPUT which would mean that you would want to â€œreadâ€ a value from this pin. This we will do when we get to buttons.

How many milliseconds are in a second?

How about in 10 seconds?

How about in a minutes?

Activity 4: Upload the sketch to the arduino and see what happens. Do this by click â€œfileâ€ and then â€œupload to I/O boardâ€.

Notice which lights blink as it is uploaded. Then what happens. Does it do what you thought it would?

Activity 6: Use a function to make our code nicer.

See how we use the digitalWrite(13,High), delay(â€¦), digitaWrite(13, LOW), delay(â€¦) over and over again for the dash and the dot. And in our code it is difficult to make out where the dots are and where the dashes are.

Letâ€™s make our code easier to read by defining two functions, and then using them.

â€¦ put the code for a dash here

Now our loop function should read

Notices how the dots all blend together? How can we fix that?