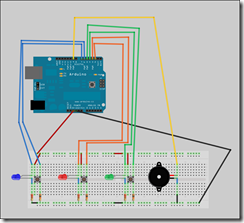 One thought on “Follow Me Game – Arduino Based Game”