If you have been talking to me at all in the past month, you must be knowing that my friend from Japan is visiting me for three weeks.Â  This has been a big focus for us for the past few weeks.Â  First, let me review how I met Yagi-san.Â  I was in Tokyo in April 2007 for a work meeting.Â  I was on the subway and this older gentleman set next to me.Â  I tried to speak some Japanese to him, but I do not think I said it correctly.Â  He says, “I would prefer it if you spoke English to me.”Â  So we talked a little and ended up exchanging email addresses.

We kept inÂ  touch via email.Â  Then my family and I visited Tokyo in July 2007.Â  We all went to his house and got to meet his family.Â  And we invited him to come to visit us.Â  That is now happening.

I have been trying to plan his trip.Â  You can see the wiki page where I have the latest plan at: www.gadgetnate.com/wiki/index.php?title=Yagi-san%27s_visit_in_March_2008

Today, Christopher and I picked him up at the airport:

We came home and met my mother-in-law and father-in-law. 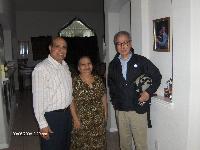 We chatted a bit, and then he took a nap.Â  So, I thought it would be good to go back to work.Â  Later that evening, Stephen played the piano for us. 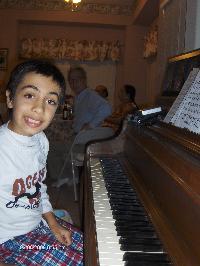 Yagi-san brought us all gifts.Â  I got a learn Japanese book.Â  Hopefully I can work on it while he is here.Â  Then we all sat down and had dinner together.

And some berries… I will have to get the names later.

And he brought some sochu, which we will have to try this weekend.

Then I tried playing shogi and learned the Kaku Gawari defense:

But it wasn’t enough… I lost two games: