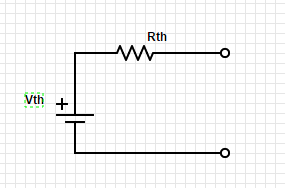 Voltage Dividers take an input voltage and gives you a smaller, fractional output voltage. This can be useful for volume control or when interfacing between logic circuits that run at 5V with new/lower power devices that run at 3.3V.

A voltage divider is a simple circuit made up of only two resistors (R1 & R2 in the diagram below). 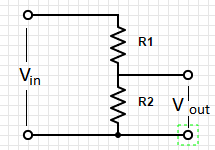 Resistance (represented in formulas as “R”) measured in Ohms which is represented using the symbol:

Resistance is the relationship between Current (I) and Voltage (R).

This relationship is defined by Ohm’s law:  R = V/I.

A large resistor in series with a small resistor has the resistance of the larger one, roughly.

A large resistor in parallel with a  small resistor has the resistance of the smaller one, roughly.

Try to develop an intuitive sense of the voltage and current in the parts of the circuit.  Do not try to calculate to be extremely precise because the precision of the components will make this pointless.  Also, good circuit design should be tolerant of variations.

Using Ohm’s law you get:

Conductance is measured in siemens

Voltage & Current describe two aspects of electronic circuits that are fundamental to understand and on which everything else will build on.

Voltage refers to a force that when applied across a circuit causes current to flow.  Voltage is measured in volts (using the symbol V) also called a “potential difference”.  It is measured across two points in a circuit.  A joule of work is needed to move a coulomb of charge through a potential difference of one volt. A coulomb is the charge of about 6×10^18 electrons.

Current (symbol: I) is the measure of electronics through a point in a circuit.  It is measured in amperes (amps) (symbol: A).  1 ampere (amp) is 1 coulomb of charge passing through a point per second.

Voltage is usually written with the symbol V but sometimes E is used.   Voltage is also called a “potential difference” or electromotive force (EMF).

When abbreviating a unit with a prefix, the unit follows the multiplier with no space and the unit is capitalized.  However, no capitalization for both prefix and unit when spelled out.  1mW = 1 milliwatt

Related information and insights from my other books

Structure of the atom:

Other things of interest

If you need more help

If you wanted to know