Sonia, Stephen, and I got up at 6 AM this morning to get Stephen to the school to take a bus to the TMSCA contest at the Village school.  As soon as he left, we all went back to sleep, and got up again at 9:40 so that we could make it to Christopherâ€™s soccer.

Today he played goalie and defense.

There was a really funny event that happened at todayâ€™s soccer game.  One person on our team was trying to make a goal.  There was a parent from the other team standing by the goal and directing the goalie for the other team.  I think he was standing a little bit in front of the goal, and our team member bounced the ball off of him and it landed into the goal.  Everyone from both teams was shocked, and we all started laughing.  It was a good thing it counted because it allowed for us to finish with a tied score. 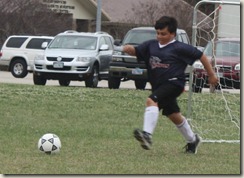 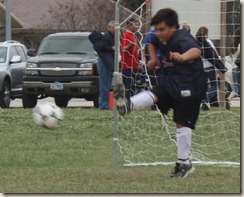 Pretty much the rest of the day was spent making the cake for the Dad and Son cake baking contest.  That is going to get its own post.

Also, Stephen did well at his contest.  He scored 1st in the calculator contest and placed well in several of his other contests.  Here are the trophies and medals that he one from todayâ€™s event. 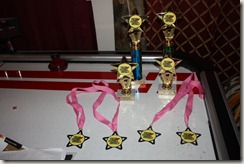