In 1965, about 80% of Chinaâ€™s population would be considered dependent.  The vast majority of this is children.  China introduces the one child policy that reduces the number of children over the next few decades.  This frees up more people to work, frees up more resources, and allows for China to compete with the rest of the world on low labor costs.  In 2010, the decreasing â€œdependentâ€ population changed direction.  That was the lowest year of the dependent population, and from here out China will see an increasing dependent population. 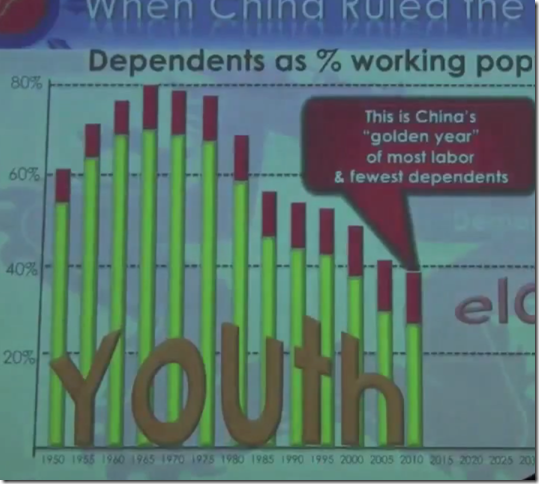 However, the growth in this group comes from â€œeldersâ€.  People who are retired.  People who no longer and will be unlikely to participate in the labor force again.  Here is the projection from WikiStrat. 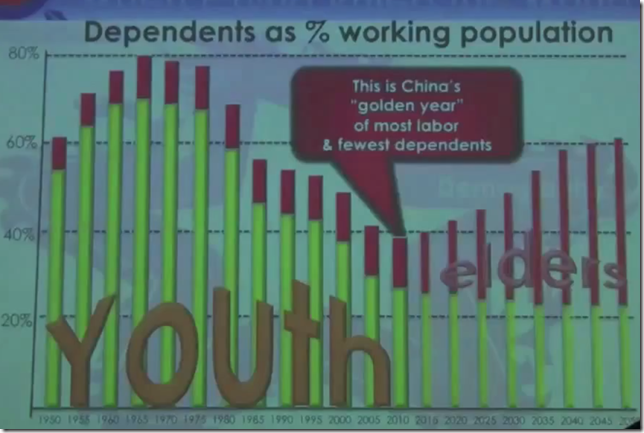 The â€œelderâ€ population will slow Chinaâ€™s growth.  They will consume more resources than the previous dependents population that was made of children.  And unlike children which could be expected to start contributing to the labor pool as early as 10 years old.  The elder population are not expected to enter this pool.

The elder population while not likely to contribute to the labor pool, their experience and knowledge could drive the transition from a labor based economy to a wisdom based economy.