CodeForces gives you programming problems and contests.  You can choose to solve them in many different languages including Python.

Once you get an account, go to problem sets and sort by solved from “highest to lowest”.  This will give you the easiest problems first.

I have made just a little progress.  But I am hoping to do this on a daily basis.  You can see my progress: codeforces.com/profile/GadgetNate

CodingBat is a free site of live coding problems to build coding skill in Java, and now in Python (example problem), created by Nick Parlante who is computer science lecturer at Stanford. The coding problems give immediate feedback, so it’s an opportunity to practice and solidify understanding of the concepts. The problems could be used as homework, or for self-study practice, or in a lab, or as live lecture examples. The problems, all listed off theCodingBat home, have low overhead: short problem statements (like an exam) and immediate feedback in the browser. The idea for CodingBat came from my experience teaching CS at Stanford combined with seeing how student’s used unit-tests in more advanced courses, and crystalized when I saw an Owen Astrachan demo of a unit-testing thing he uses with his Duke students.

It is idea.  There are a few drawbacks.  The coding editor does not capture “tab” characters which is a real killer in Python where indention is nearly as common as “;” is in Java or C#.  The problems are great to get started.  Each problem essentially tells you to write a subroutine (def) and then it runs a set of unit tests on it.  It does allow for you to create your own problems.  But the editor to do this does not look to inviting. 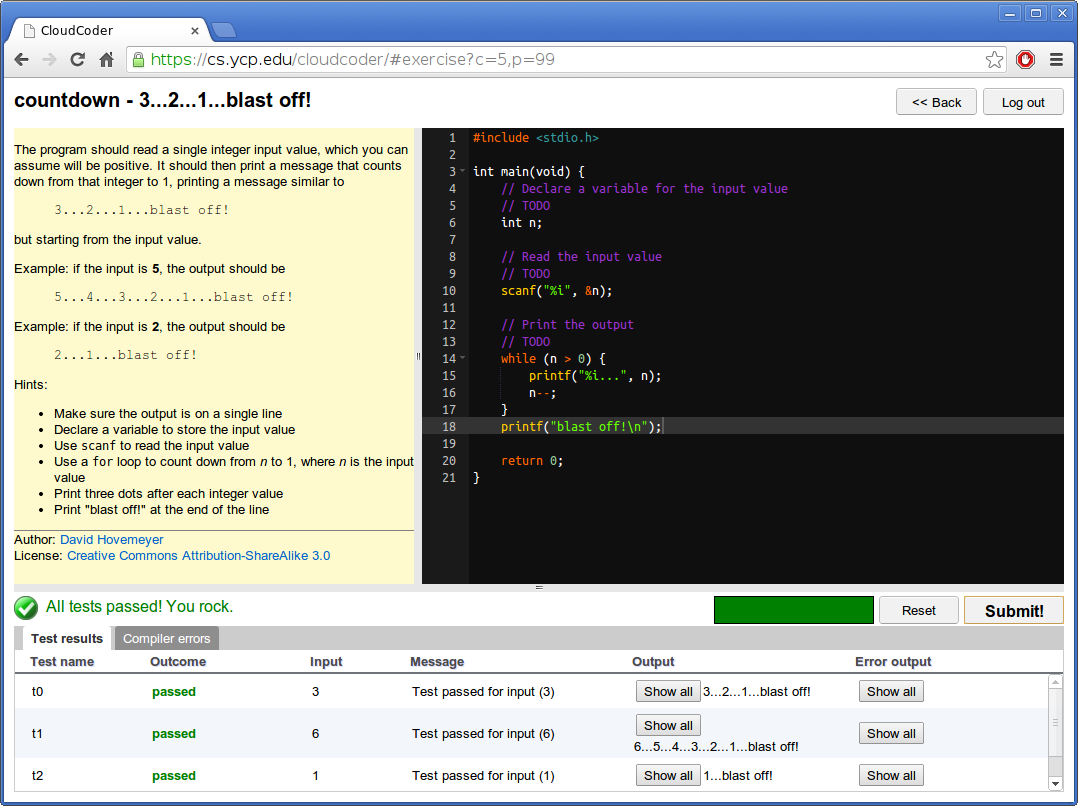 CloudCoder is an open source web-based programming exercise system (inspired by CodingBat). It is designed to make it easy for instructors of introductory programming courses to assign short exercises to students for skills development and assessment. Currently, exercises in C/C++, Java, Python, and Ruby are supported.

Because CloudCoder is web-based, it is easy for students to use. The only software students need to work on exercises is a web browser.

It is opensource and written in Java, and it is hosted on GitHub: github.com/cloudcoderdotorg/CloudCoder 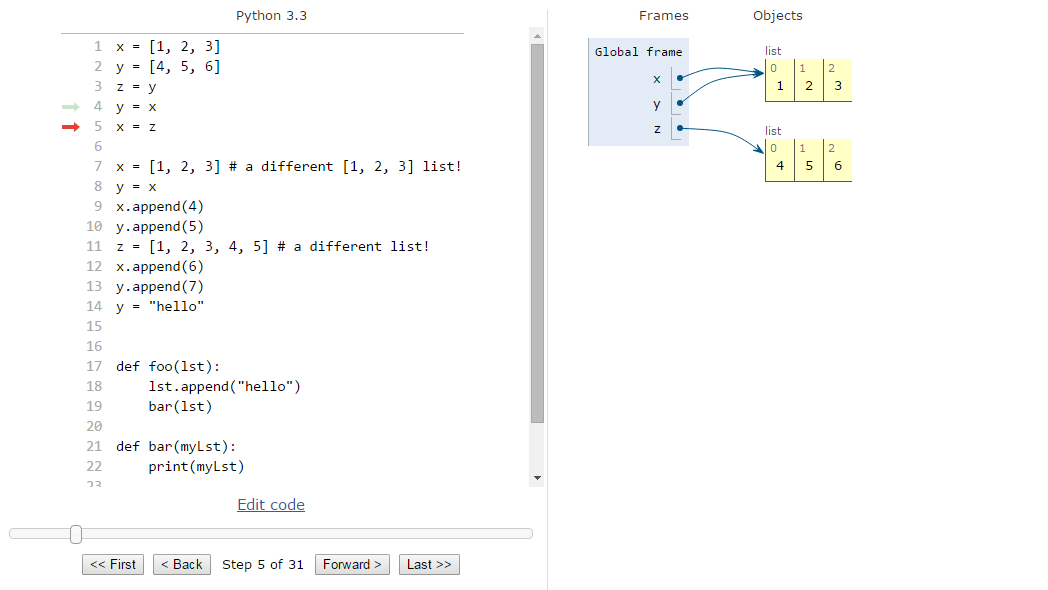 Online Python Tutor is a free educational tool created by Philip Guo that helps people overcome a fundamental barrier to learning programming: understanding what happens as the computer executes each line of a program’s source code.

Using this tool, you can write Python, Java, JavaScript, TypeScript, and Ruby programs in your Web browser and visualize what the computer is doing step-by-step as it executes those programs.

Their visualization component can be embedded in a website using an iFrame and the code is passed in URLEncoded to the source.    This allows for the student to step through the code line by line.  They see what is in memory, the input and the output.  It can be a great way for students to explore their code.  And it seems like a natural extension to the CloudCoder and CodeBat sites.

Trinket lets you run and write code in any browser, on any device.

Easily share or embed the code with your changes when you’re done. 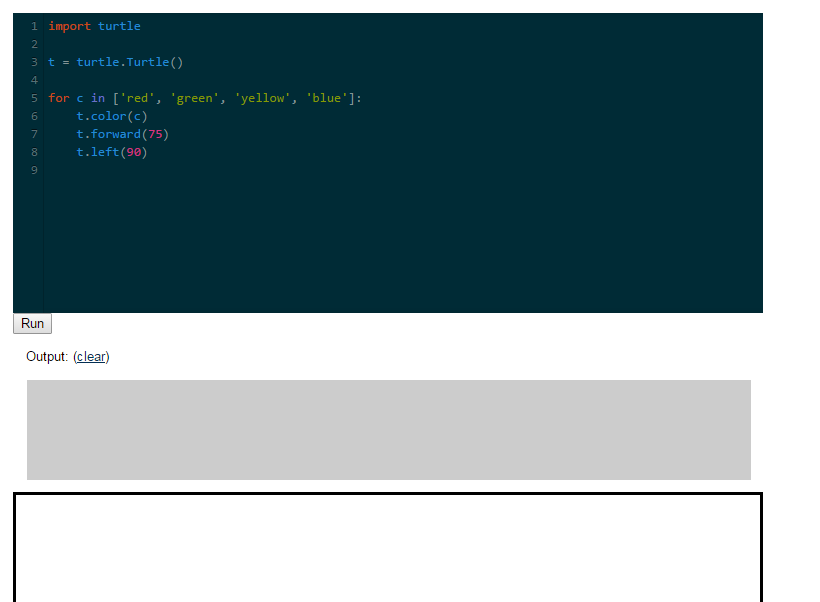 Skulpt is an entirely in-browser implementation of Python. 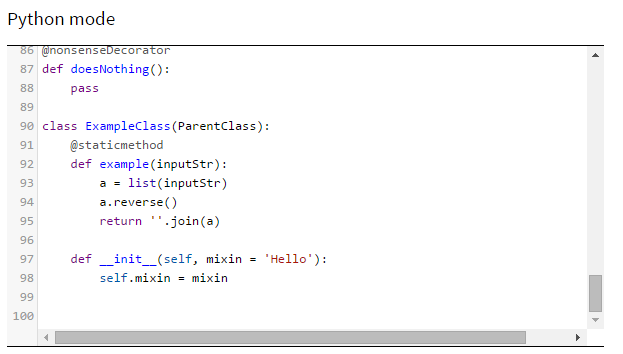 CodeMirror is a versatile text editor implemented in JavaScript for the browser. It is specialized for editing code, and comes with a number of language modes and addonsthat implement more advanced editing functionality.

A rich programming API and a CSS theming system are available for customizing CodeMirror to fit your application, and extending it with new functionality.

A few of my friends and their children meet up on Sundays to review MathCounts and now we have added a program/electronics/robotics section which we have started out by doing Python.  These are middle school kids.  Their ability to control their attention span is limited.  Don’t misunderstand me.  They have long and focused attention spans.  But only for things that capture their interest (like Brawl on the Nintendo or Type Racer or some other game).  Our Python training on the first day did not fall into that category.  So after a few hours of math in the morning, the Python training essentially put them to sleep.

But they love Type Racer.  Which has me on the quest to bring the same focus, interest, and experience to our Python classes.  More on that later..

I have been looking at some of the various contest problems.  Every year HP sponsors a contest called HP CodeWars and looking through some of the problems, the kids should be able to solve some (with minor modifications of the problems) today.  I have printed out a handful which we can give to the kids that are further ahead to keep them engaged.  We can also integrate them into future lessons as well:
www.hpcodewars.org/index.php?page=samples
Here are some other contest problems that we can use or get ideas from:
American Computer Science League: http://www.hpcodewars.org/index.php?page=samples
Cornell University High School Programming Contest: http://www.cs.cornell.edu/home/rvr/ProgrammingContest2015.pdf
USA Computing Olympiad: http://www.usaco.org/index.php?page=resources
Proco: http://proco.stanford.edu/2009/
UIL Computer Science: http://www.uiltexas.org/academics/computer-science
Battle of the Brains: http://www.utdallas.edu/k12/contest/
Other Python Resources:
Tying in Robotics using Raspberry Pi:
www.intorobotics.com/18-excellent-tutorials-compilation-start-working-raspberry-pi/
pingbin.com/2012/12/30-cool-ideas-raspberry-pi-project/
readwrite.com/2014/01/21/raspberry-pi-great-projects
www.youtube.com/watch?v=LlFkybEQFFA
OpenCV using Python: https://opencv-python-tutroals.readthedocs.org/en/latest/py_tutorials/py_tutorials.html
Communicating to the Arduino in Python: http://playground.arduino.cc/Interfacing/Python
Running Python on the Arduino (Python on a chip): http://playground.arduino.cc/CommonTopics/PyMite
Python related Arduino lessons: http://www.toptechboy.com/using-python-with-arduino-lessons/
Understanding Internet protocols by building servers/clients:
Sockets overview and creating an Echo server: http://www.bogotobogo.com/python/python_network_programming_server_client.php
Build a webserver in Python: http://ruslanspivak.com/lsbaws-part1/
Webclient (extremely simple): http://stackoverflow.com/questions/4220601/writing-a-small-yet-flexible-http-client
Python Chat server: http://www.ibm.com/developerworks/linux/tutorials/l-pysocks/
Creating web applications in Python (review of options and frameworks):
docs.python.org/2/howto/webservers.html
docs.python-guide.org/en/latest/scenarios/web/
Leave a comment with Python resources you think I should check out.

A fellow parent and I are working on putting together a Python class for our middle school children.  In the first lesson, planning to cover: 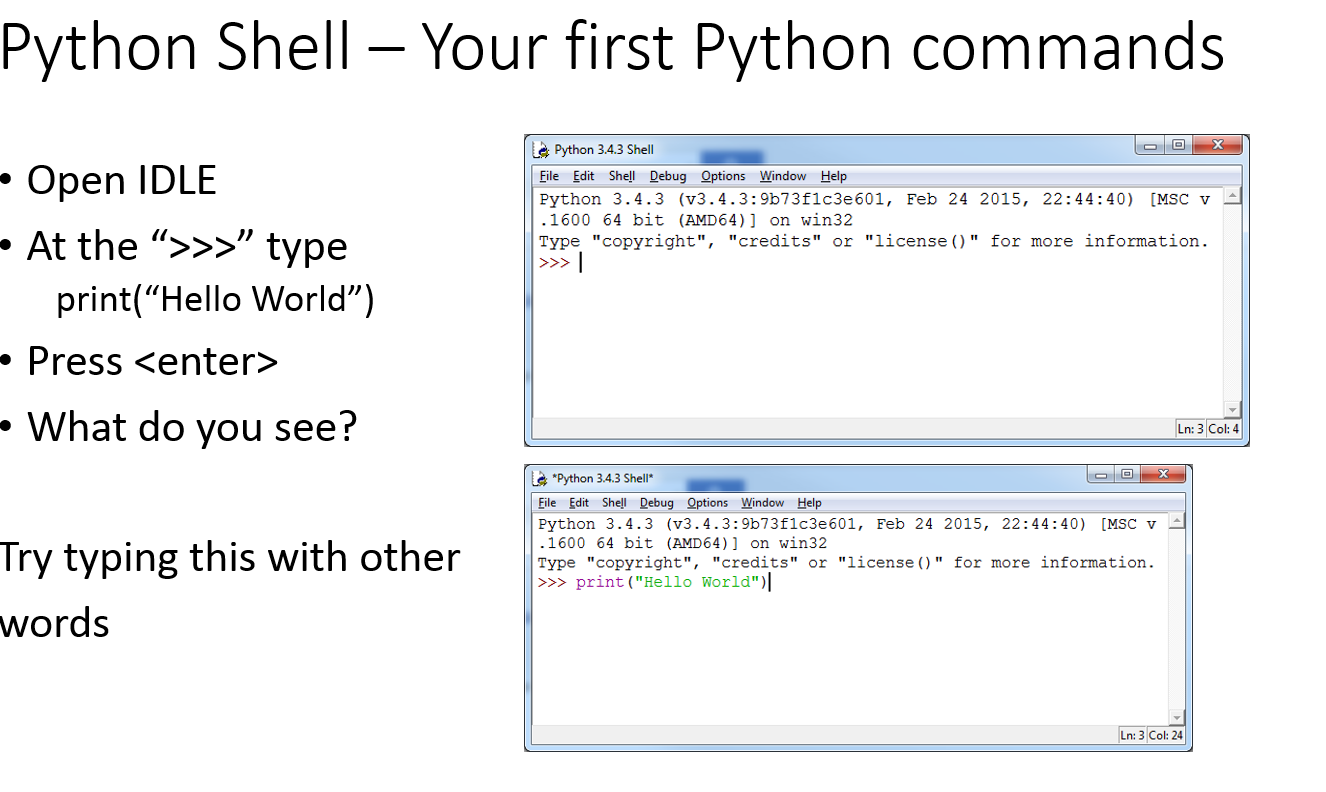 Here is the PowerPoint file we have so far:

I have three photoresistors in my study that are measuring light coming from 3 directions and showing the live and historical data on the graphs below. 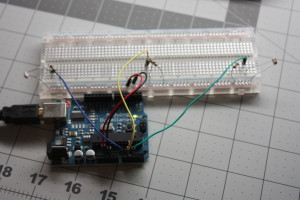 Simple circuit.  Here is how the Arduino is hooked up.  (The resistors are 10k.) 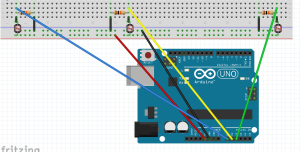 /* Simple test of the functionality of the photo resistor

Connect a resistor (around 10k is a good value, higher
values gives higher readings) from pin 0 to GND. (see appendix of arduino notebook page 37 for schematics).

And to connect the arduino to the internet I used my laptop and a program called Seriot.  It can be downloaded from:

This program will listen to the serial port and write the data to ThingSpeak.com 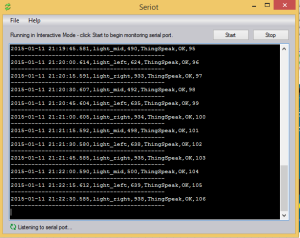 You can then use Restful API calls to get to the data and to chart it.

They have a nice ChartEditor 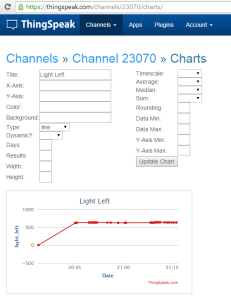 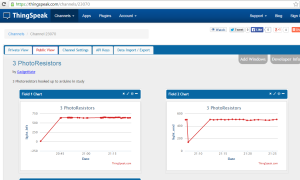 Today I have been working on importing a text file into Excel and using VBS to do some processing and transformation of it.  In the process I found 3 things worth sharing/commenting on:

1) You may be familiar with the “trim()” function in Excel and in VBS.  It removes extra white spaces in a string.  But did you know that there is a “clean()” function in Excel that will remove “non-printable” characters.  There is a good write up of it at www.globaliconnect.com/excel/index.php?option=com_content&view=article&id=118:excel-text-and-string-functions-trim-a-clean&catid=78&Itemid=474

3) File paths from VBS in Mac are not what you expect.  You can not just put in the /path/to/the/file.txt and expect for it to work.  Still a little more work to figure this one out.

â€œCanâ€™t talk nowâ€¦ Iâ€™m on a schedule.â€  â€œNo, I have no time to meet this week.â€  â€œReally focused, canâ€™t think about that right now.â€  If you have talked to me in the past two weeks, you have probably heard something like that.  Also, you may have noticed that I have been a little slow on emails, not attending events that I normally go to (like the cypress coffee club networking meeting and the CyFair Chamber meetings or the Friday night chess meets, toastmasters, etc.)  You may have noticed that the daily learn Hindi show on ISpeakHindi.com has been a little less than daily.  And you might be tempted to ask â€œAre you OK?â€  or perhaps you think I am working on some super secret project.  Well, it is time that I set the record straight.

These past two weeks I have been engaged in something that is best described as â€œcontinuous contact parentingâ€.  In past summers we have sent the kinds off to various camps.  But this summer I am at home and available to spend with them 24/7.  I want to make the most of this time.   Because I know that in less than a decade both of them will out of the house, and I will probably have time for them at that point, but they will probably be too busy with their lives for me.

But how to make the most of the summer?  Should I just sit around and do whatever comes to mind.  Should we just play board game after board game.  Read books.  Watch movies.  What should we do?

I had some very specific ideas on what an ideal summer day might look like.  It should have exercise.  Time for eating.  Piano practice.  Math worksheets.  Piano writing.  But there is one area that I thought we could focus on and have a lot of fun:  Electronics and robotics.  After putting all that together, we came up with a daily schedule that we would try for two weeks:

Here are some pictures to give you some idea:

We also put together some kits: 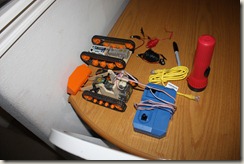 In fact, we have a â€œwall of completed projectsâ€ where we put a postcard or something to indicate the projects that we have finished: 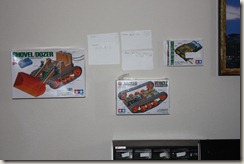 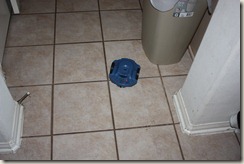 During our free time we did end up playing a board game, Settlers of Catan.  My friend, Daniel Parker, in Austin introduced it to us a couple of weeks ago.  Since then we have played dozens of games. 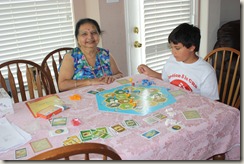 This is just a small glimpse of the things we have been up to.

Earlier this month, I attended the Lone Star Ruby Conference in Austin. 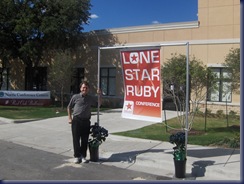 Yukihiro Matsumoto (Matz), the creator of Ruby, was there.  We got to meet and talk.  He is a very nice person.

Here is a picture of (from left to right) me, Matz, and Daya. 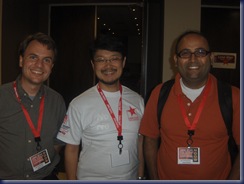 The previous posts are random notes that I took through out the conference.  I mainly took them for myself… but maybe they might be of interest to you too..