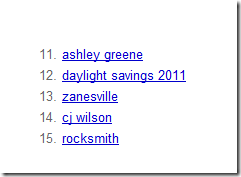 Wow!  Rocksmith is like GitarHero but with a real Gitar?  Looks really cool:

Learning how to play a musical instrument can be a challenging task, so when Ubisoft announced it was making a game that used an actual electric guitar as a controller, there were plenty of skeptics, including us. In order to put Rocksmith through its paces, we decided to have someone with zero guitar experience (outside of the plastic Rock Band variety) give the game a go. While it has a few rough edges as a game, Rocksmith is a surprisingly fun way to learn how to play.