Mitt Romney is #9, Ron Paul #10, and Newt Gingrich is #17.  It is interesting to see these 3 but not see Rick Perry or Herman Cain on the list..  Is that because people already know about Rick Perry and Herman Cain but want to find out more about Romney, Paul, and Gringrich?  Or does it mean there really is more interest in these three?

Actually, looking at wikipedia, there are quite a few GOP presidential candidates that are missing:

Why have these three made it into the Google Trends top 20?

Doing a Google News search for Romney doesnâ€™t suggest much:

It does probably indicate why Newt made the list.  Apparently at the recent debate there was some interest in the interaction between Romney and Gringrich.

Google News search for Ron Paul does not generate many clues either:

A little bit more about Newt Gingrich in Google News: 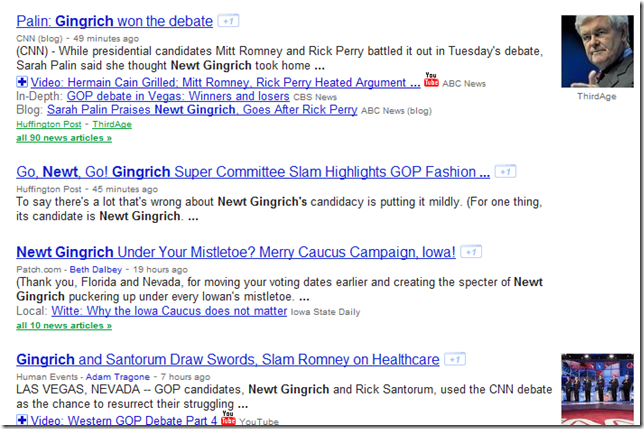 Definitely the most advocative results of the three.

ketelsen Katie Ketelsen
First political tweet: The more I hear #RonPaul speak the more I like him. ht.ly/72ob4

SuPerlative73 Sudan Life |718
…Gringrich & Santorum were not invited to the after debate party festivities… Because they were described as quote…"Not Ballers!"

thesportsexpert Riker Kasamoto
Love reading all these tweets about the #GOP. Gringrich is getting a lot of support and everybody hates Rick Perry.

tdkelly Tim Kelly
If we have to listen to Newt Gringrich for seven 3-hour debates, the terrorists have already won.

Still not much insight into why these three are suddenly of interest and the other ones are not..