Combining the recordings has taken a little time to figure out.  But now I can merge them, and convert them to MP3.  Here is a screenshot of the page that produces the script in Spanish (just filter the Spanish lines) and puts links to the combined .Wav and .Mp3

I had some trouble with LAME.  It did not like the .Wav in the default format that the Java Sonics ListenUp Java Applet records in, i.e. ADPCM.  It kept saying “unsupported format”.  But it did work with “u8”.  There is some type of distortion in the background though..

I should also point out that I found a really neat looking PHP class to work with wav files called wav edit.  I could not get it to work with the wavs I recorded though.  Here are some screenshots of the sample page and a link to give you and idea of what I’m talking about.

using the recordings provided in the .zip 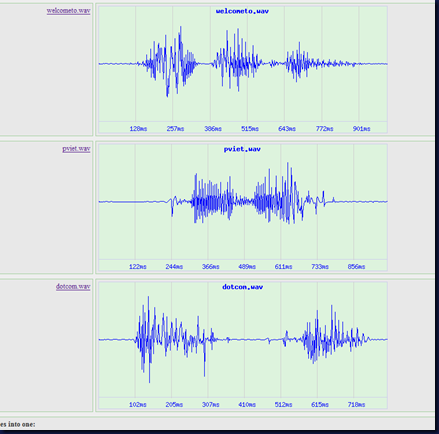